Attractions near Wroclaw - 5 places for a trip into nature

Other news
Events in Wrocław 2022 - where to go in the second half of the year? Where to go with your children in the mountains? Choose Lower Silesia! What to take on holiday with your child? List of essentials Stay Wild Festival Contest! Cycling routes in Wrocław - the best paths for fans of two wheels Parks in Wrocław - where to go for a walk? What to do in Wrocław during the May weekend? Where to go for a long may weekend? April Fool's Day Competition! What to see in Wroclaw in winter? 10 recommended attractions! Valentine's Day competition "In love at the Europeum" What to do during winter holidays in Wrocław? Pillow menu How to organize a company Christmas Party? Christmas Market in Wroclaw 2021 - dates, attractions and driving directions September is not the end of summer holidays! Centennial Hall - UNESCO World Heritage Wroclaw Beach Bars, in other words chill-out in the city Legends of Wrocław - Europeum tells. The history of The Dumpling Gate #EuropeumBikeChallange, in other words Wroclaw by bike The 10 best restaurants in Wrocław TOP 7 Museums you MUST SEE in Wroclaw 5 steps to organizing the perfect training Free attractions in Wrocław Excellent hotel breakfast Attractions for the family in Wrocław - 7 places to see! Easter - great preparations Where to go for a walk around Wrocław? Weekend in Wrocław? See what to see in two days [GUIDE] We are all women today Discover Lower Silesia with Europeum Stay safe with us! Art (and the hotel! - editorial note) washes away the dust of everyday life from the soul. - Pablo Picasso Successful recipe for Fat Thursday 10 must-see places in Wrocław Helping? It is in our genes! If nothing goes right, call Grandma and Grandpa Merry Christmas! Christmas p(art)y We wish you the best Andrew! It will be season yet! Piotr Micek. To notice the unit in its entirety. Daria Wartalska. Post consumption. We create interiors that will hug you Childhood, where are you? COVID-19: Europeum Code of Practice Become a hero in your home for Easter! Valentine's Day in Europeum
show all
22 of July 2022

Attractions near Wroclaw - ideas for the summer heat

Holidays are the ideal time to visit beautiful places and attractions around Wrocław. Not far from Wrocław you will already encounter the first Sudeten ranges, but Lower Silesia is not only mountains. Castle ruins, colourful lakes, the Skalne Miasto (Rock Town), the much-loved Andrzejowka (Andrzejowka) or the beautiful Bystrzyca Valley are just some of the attractions in Lower Silesia that can be seen in close proximity to Wrocław. So when choosing a holiday in Wrocław, you don't have to give up relaxing among the greenery. The Europeum is a hotel in Wrocław close to the Market Square, from where a trip to these places will take up to 2 hours by car!

The Janowickie Ore Mountains are a unique attraction near Wroclaw - nearly 90m2 of beautiful, diverse and waiting to be discovered terrain, less than a 2-hour drive from the capital of Lower Silesia. The network of trails is extremely dense, so a hike can be arranged to suit every tourist's tastes and abilities. One of the most well-known attractions is the Colourful Lakes - a phenomenon on a global scale. They were voted one of the 7 wonders of Poland by National Geographic. With favourable conditions and good hydration of the area, we can see four differently coloured lakes: yellow, purple, azure and green. 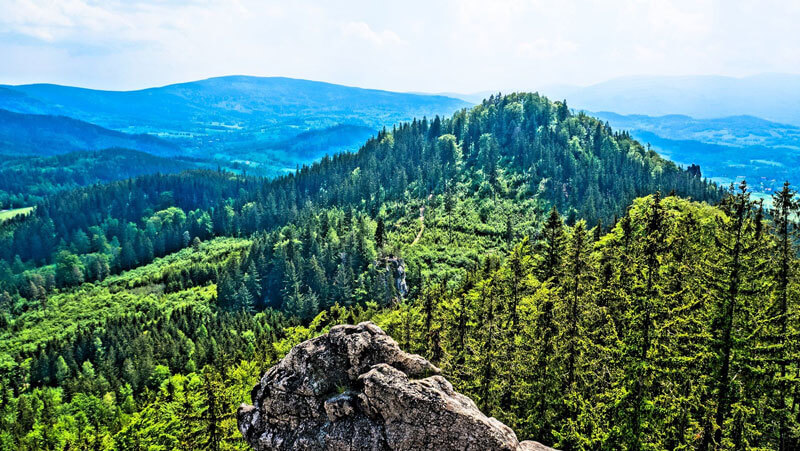 The Książ castle is one of the best known attractions near Wrocław and one of the most famous castles in Lower Silesia. However, not everyone knows that right next to it, in a picturesque area, one can find the ruins of Stary Książ. The 13th-century romantic castle was built on the foundations of a medieval Piast castle.

Situated over the gorge of the Pełcznica River, the monument is an ideal place for a holiday stroll. A particularly picturesque route leading to the ruins is the Hochberg Path. It leads along the Pełcznica River from Książ Castle to Stare Księży. Bridges, cliffs, rich vegetation, a forest path and a picturesque vantage point of Książ Castle - it is difficult to describe the beauty of this route.

In its heyday, the castle was a venue for social gatherings, lavish and sumptuous parties and hunting trips. It hosted, among others, Russian Tsar Nicholas I, Prussian King Friedrich Wilhelm III and John Adams, the future President of the United States.

Although not much of the building has survived to the present day, it is still an interesting and worth seeing place, mainly because of its beautiful surroundings and two preserved Renaissance porticoes. The drive from Wrocław takes about 1.5 hours. 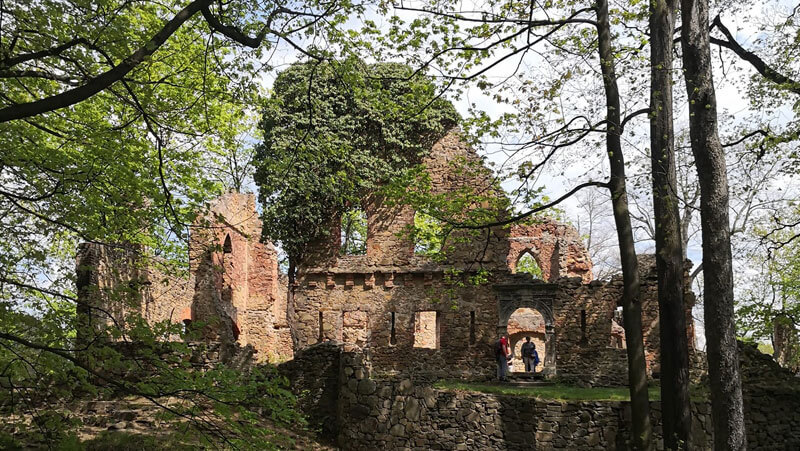 If we are already near Walbrzych, a great place for a walk and a rest is the Andrzejówka mountain hostel. This place, located at the foot of the Kamienne Mountains, is a fixed point on the map of tourists discovering attractions close to Wrocław.

Following the yellow trail from Andrzejówka towards Walbrzych, you will come across a beautiful viewpoint and the ruins of Rogowiec castle. It is not a demanding route, but it is worth seeing the beautiful surroundings from an unusual perspective. In Andrzejówka itself, during the spring and summer season, we especially recommend eating botwinka, which is a great meal after long walks.

You can reach Andrzejówka from Europeum in 1.5 hours. For more sturdy walkers, we recommend leaving the car in Wałbrzych, taking a bus to Rybnica Leśna and returning along the beautiful route leading from the hostel through the Kamienne and Wałbrzyskie Mountains. 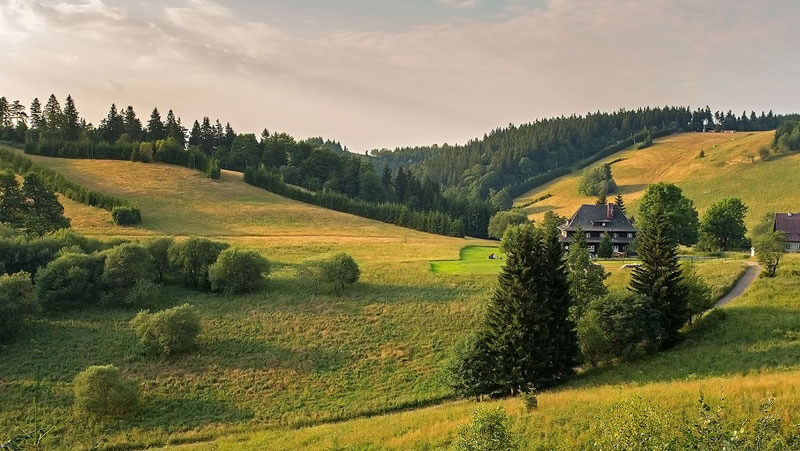 Just take a car or train and within 2 hours you will find yourself in a truly beautiful and - importantly in summer - cool place. We are talking about the so-called "Bohemian Moria", or Rock Town - an internationally renowned attraction near Wrocław. It is a fantastic rock labyrinth just across the Czech border. However, it is worth knowing that the Rock Town is actually a combination of two rock communities: Adršpach Rocks and Teplice Rocks, which are connected by the Wolf Gorge. Sound mysterious? That's the whole atmosphere of the local labyrinths!

In Adršpach itself, you can choose to take a section of the route by boat or walk through all the passages on foot. The rock giants are connected by many kilometres of paths on wooden bridges and steps. The nature reserve itself enjoyed great popularity as far back as the 18th century, when famous and esteemed artists and rulers - August II the Strong, Joseph II or Goethe - flocked to the Rock Town. 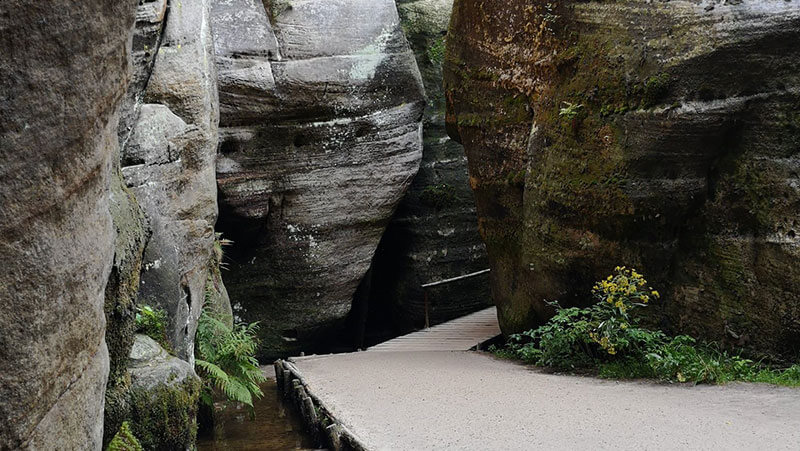 Last but not least, the Bystrzyca Valley is an interesting attraction in the vicinity of Wrocław. It is an ideal place for a family walk or a bike ride. The best way to get here is by train or car, and the route takes about 30 minutes. A 32-kilometre-long educational trail will lead you from Kąty to Wrocław itself. The area itself is full of bridges, beautiful vegetation, while during the walk we are accompanied by the sound of the Bystrzyca river, one of the main tributaries of the Oder.

Along the way, we can encounter historic villages such as Sośnica with its historic buildings. All around is silence, with only the sound of birds singing and the rustle of trees. It is certainly one of the places where we can find respite not only from the heat, but also from the hustle and bustle of the city. 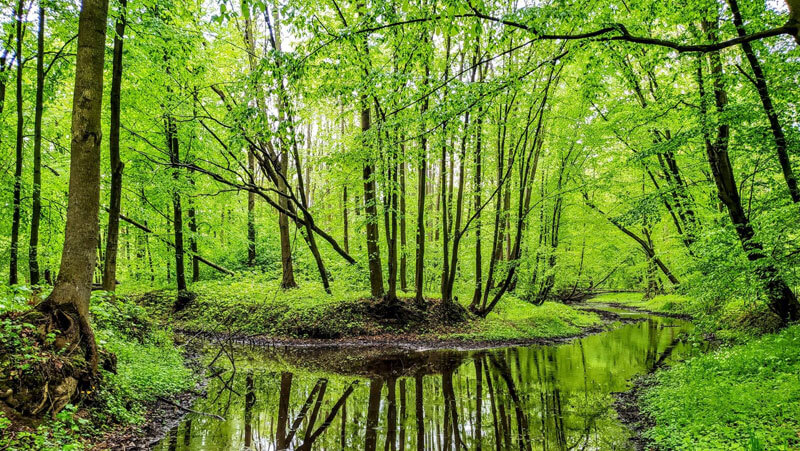