Where to go for a walk around Wrocław?

Other news
Events in Wrocław 2022 - where to go in the second half of the year? Where to go with your children in the mountains? Choose Lower Silesia! What to take on holiday with your child? List of essentials Attractions near Wroclaw - 5 places for a trip into nature Stay Wild Festival Contest! Cycling routes in Wrocław - the best paths for fans of two wheels Parks in Wrocław - where to go for a walk? What to do in Wrocław during the May weekend? Where to go for a long may weekend? April Fool's Day Competition! What to see in Wroclaw in winter? 10 recommended attractions! Valentine's Day competition "In love at the Europeum" What to do during winter holidays in Wrocław? Pillow menu How to organize a company Christmas Party? Christmas Market in Wroclaw 2021 - dates, attractions and driving directions September is not the end of summer holidays! Centennial Hall - UNESCO World Heritage Wroclaw Beach Bars, in other words chill-out in the city Legends of Wrocław - Europeum tells. The history of The Dumpling Gate #EuropeumBikeChallange, in other words Wroclaw by bike The 10 best restaurants in Wrocław TOP 7 Museums you MUST SEE in Wroclaw 5 steps to organizing the perfect training Free attractions in Wrocław Excellent hotel breakfast Attractions for the family in Wrocław - 7 places to see! Easter - great preparations Weekend in Wrocław? See what to see in two days [GUIDE] We are all women today Discover Lower Silesia with Europeum Stay safe with us! Art (and the hotel! - editorial note) washes away the dust of everyday life from the soul. - Pablo Picasso Successful recipe for Fat Thursday 10 must-see places in Wrocław Helping? It is in our genes! If nothing goes right, call Grandma and Grandpa Merry Christmas! Christmas p(art)y We wish you the best Andrew! It will be season yet! Piotr Micek. To notice the unit in its entirety. Daria Wartalska. Post consumption. We create interiors that will hug you Childhood, where are you? COVID-19: Europeum Code of Practice Become a hero in your home for Easter! Valentine's Day in Europeum
show all
24 of March 2021

There are several walking routes in the capital of Lower Silesia, and if you haven't discovered any yet, we recommend taking the “Around the Old Town” hike as your first choice. 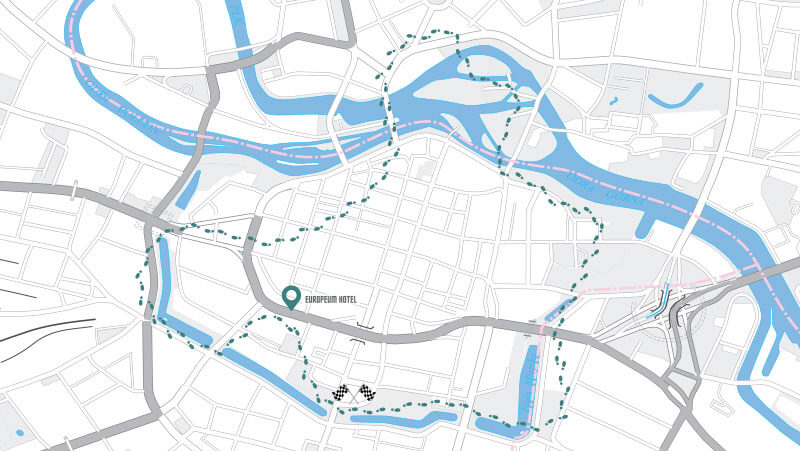 There are almost five kilometers to go. It doesn't seem like much, but the whole thing can take up to five hours! We start at Świdnicka Street, in a place where the Świdnicka Gate stood about a hundred years ago. Unfortunately, a small square, a gate guard building and the former Church of the Knights of St. John, built in the Gothic style in the 15th century, have remained after it. We follow Piotr Skargi Street  and we stop in front of  Partisans’Hill (remains of the 16th century fortifications). Numerous gazebos, springs, rich flora and romantic nooks favor couples in love strolling in the area. It was here that in 1945 the headquarters of the  Wrocław Fortress defence was located, and the air raids and numerous bombardments caused such huge damage that even numerous restoration works did not manage to return to the former glory of the Hill, also known as the Pannier Bastion.

Walking along the moat, we head towards the former Oławska Gate. We pass Art Nouveau buildings from the end of the 19th centur, and  the General Consulate of the Federal Republic of Germany. Crossing the underground passage, we can admire the relics of the walls from the 15th century together with a model showing this part of Wrocław's fortifications. After crossing Oławska Street , standing near the Dominican Gallery, we will see a small church under the invocation of st. Christopher. Still holding onto the moat (next to the Gallery building), on the opposite side we can see the huge building of the Main Post Office -  built in 1927 and today housings the only Museum of Post and Telecommunications in Poland. Here you will learn the history of the telegraph, telephone and Polish postage stamp. 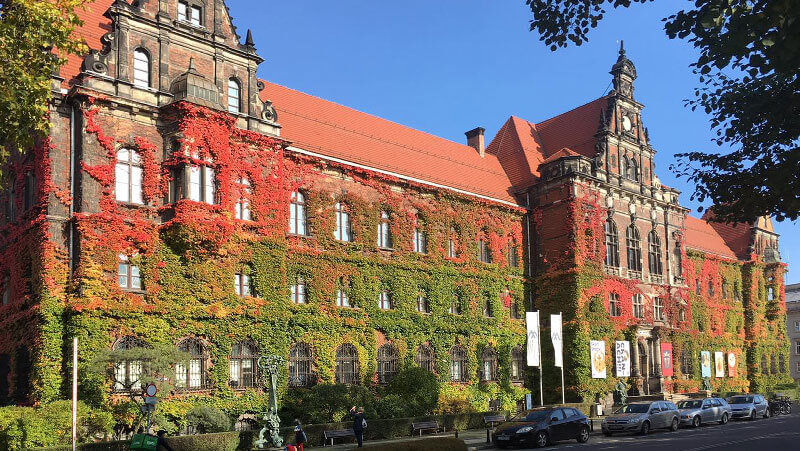 At  J.E.Purkyniego Street , we can admire the neo-Renaissance building of the National Museum, which housing  rich collection of paintings, graphics, Silesian sculpture, artistic craftsmanship and Polish contemporary art. In front of the building there are three bronze monuments: Michelangelo and Albrecht Dürer, and the Allegory of Fishing. In the park nearby, there is a monument to the Victims of the Katyn Massacre, commemorating 22,000 murdered Polish officers and policemen. 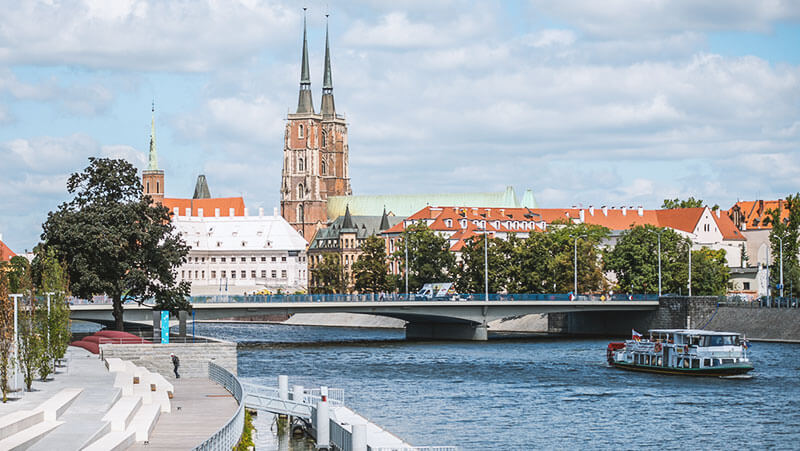 Nearby waiting for us "Panorama of the Battle of Racławice" - a branch of the National Museum, a place particularly worth seeing. The unique canvas measuring 120 x 15 m is the work of a team of painters led by J. Styka and W. Kossak. The painting was created in Lviv in 1894. The route of our journey now leads to the Polish Hill, through the Gondola Bay, from where we can admire the wonderful panorama of the right bank of Wrocław with Ostrów Tumski and the Sand Island. Walking along the Odra River, we leave the Old Town Promenade and the Xawery Dunikowski Boulevard and enter Polski Square, where we see the Academy of Fine Arts with the sculpture " Head of a Worker". Then we follow the Sand Bridge and walk along the S. Kulczyński Boulevard, across the Oder Islands, where Wrocław was shaped in the 11th and 12th centuries. 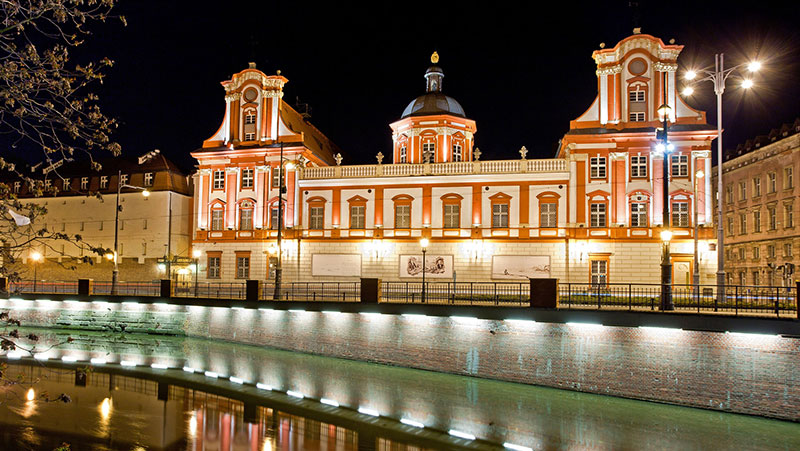 Passing the main building of the University of Wrocław, we come to Nowy Świat Street , passing the hydroelectric power plant, we come to the Municipal Museum in the former arsenal. This Renaissance building is one of the oldest of its kind in our part of Europe. The origins of the arsenal date back to 1459. Inside, there are military collections and archaeological exhibits. On Saint Nicholas Street , we can admire the church of st. Barbara, today the Orthodox cathedral and the former All Saints Hospital, which dates back to the first half of the 16th century. 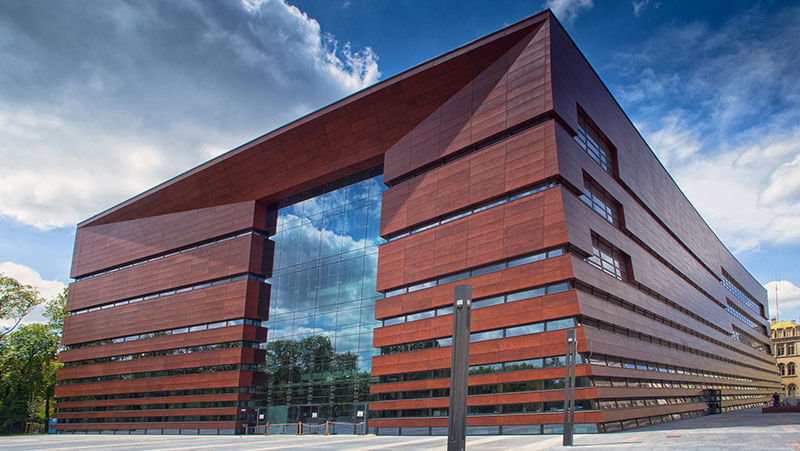 Our hiking trail now leads through the trees - beautiful chestnut trees, plane trees and lime trees, still along the moat. In front of us there is Orląt Lwowskich Square and the Świebodzki railway station built in 1843. An alley of historic trees leads us to Krupnicza Street . On the way we pass the neo-baroque building of barracks, erected in 1835, now the seat of the district office of Wrocław land and the neo-gothic building of the new stock exchange. It is worth paying attention to the complex of neo-Gothic buildings intended for courts. The origins of the building date back to 1844. Above the moat, among the greenery, we enter Wolności Square, the former Castle Square, where the National Forum of Music stands - a modern concert hall complex and the seat of the Wrocław symphony orchestra, as well as the place of many significant events. There was also a royal castle, which dates back to 1750. The oldest baroque part, occupied by the City Museum, has remained from the former royal castle to this day.

Our walking route around Wrocław ends right next to the Europeum Hotel building. I guess you agree that this is the perfect location for a "starting point" during a city break?

You can find other guides and guides here:

Weekend in Wrocław? See what to see in two days