Legends of Wrocław - Europeum tells. The history of The Dumpling Gate

Other news
Events in Wrocław 2022 - where to go in the second half of the year? Where to go with your children in the mountains? Choose Lower Silesia! What to take on holiday with your child? List of essentials Attractions near Wroclaw - 5 places for a trip into nature Stay Wild Festival Contest! Cycling routes in Wrocław - the best paths for fans of two wheels Parks in Wrocław - where to go for a walk? What to do in Wrocław during the May weekend? Where to go for a long may weekend? April Fool's Day Competition! What to see in Wroclaw in winter? 10 recommended attractions! Valentine's Day competition "In love at the Europeum" What to do during winter holidays in Wrocław? Pillow menu How to organize a company Christmas Party? Christmas Market in Wroclaw 2021 - dates, attractions and driving directions September is not the end of summer holidays! Centennial Hall - UNESCO World Heritage Wroclaw Beach Bars, in other words chill-out in the city #EuropeumBikeChallange, in other words Wroclaw by bike The 10 best restaurants in Wrocław TOP 7 Museums you MUST SEE in Wroclaw 5 steps to organizing the perfect training Free attractions in Wrocław Excellent hotel breakfast Attractions for the family in Wrocław - 7 places to see! Easter - great preparations Where to go for a walk around Wrocław? Weekend in Wrocław? See what to see in two days [GUIDE] We are all women today Discover Lower Silesia with Europeum Stay safe with us! Art (and the hotel! - editorial note) washes away the dust of everyday life from the soul. - Pablo Picasso Successful recipe for Fat Thursday 10 must-see places in Wrocław Helping? It is in our genes! If nothing goes right, call Grandma and Grandpa Merry Christmas! Christmas p(art)y We wish you the best Andrew! It will be season yet! Piotr Micek. To notice the unit in its entirety. Daria Wartalska. Post consumption. We create interiors that will hug you Childhood, where are you? COVID-19: Europeum Code of Practice Become a hero in your home for Easter! Valentine's Day in Europeum
show all
02 of July 2021

We invite you to the new series: Legends of Wroclaw - Europeum tells. 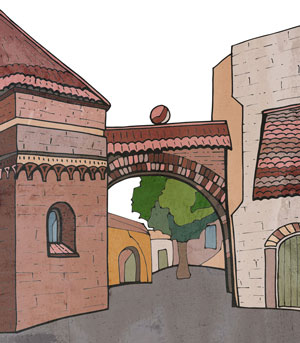 Once upon a time there was a married couple: Konrad and Agnieszka. They lived in one of the villages near Wroclaw. Konrad worked and Agnieszka looked after the house. Her husband loved the noodles she prepared above all else, so she pleased him by cooking them almost every day.

One day, Agnieszka fell ill and died after a few days. Poor Konrad was left alone in the world. Not only did he miss Agnieszka, but he was always hungry because he couldn't cook himself. When he came home from the market one evening after a hard day's work, he felt tired. He decided to rest at a small church in Ostrów Tumski. However, he fell asleep quickly and had a very unusual dream. He dreamed of his beloved, who in a dream offered him a bowl of warm, fragrant dumplings. Agnieszka told him that such a bowl of hot food would be waiting for him every day when he came home from work, but on one condition: he had to leave one dumpling at a time. The man was so happy about it that he woke up. To his amazement, there was indeed a bowl full of his favorite dish waiting next door. Hungry Konrad started to eat as quickly as possible. When the last noodle was left, he hesitated. But after looking around, he realized that it was just a dream, and this one particular dumpling looked the most appetizing, so he decided to eat it as well. Then something strange happened. The dumpling started to run away from his fork, and he, madly, decided to chase her. At one point he grabbed a dumpling, but it unfortunately fell out of him, this time on the gate. He started to climb and when he got up…. the dumpling was petrified. Konrad came down, took the bowl and went home.

From then on, his bowl was always empty, and to this day, the stone dumpling lies on one of the Wroclaw gates.