Parks in Wrocław - where to go for a walk?

Other news
Events in Wrocław 2022 - where to go in the second half of the year? Where to go with your children in the mountains? Choose Lower Silesia! What to take on holiday with your child? List of essentials Attractions near Wroclaw - 5 places for a trip into nature Stay Wild Festival Contest! Cycling routes in Wrocław - the best paths for fans of two wheels What to do in Wrocław during the May weekend? Where to go for a long may weekend? April Fool's Day Competition! What to see in Wroclaw in winter? 10 recommended attractions! Valentine's Day competition "In love at the Europeum" What to do during winter holidays in Wrocław? Pillow menu How to organize a company Christmas Party? Christmas Market in Wroclaw 2021 - dates, attractions and driving directions September is not the end of summer holidays! Centennial Hall - UNESCO World Heritage Wroclaw Beach Bars, in other words chill-out in the city Legends of Wrocław - Europeum tells. The history of The Dumpling Gate #EuropeumBikeChallange, in other words Wroclaw by bike The 10 best restaurants in Wrocław TOP 7 Museums you MUST SEE in Wroclaw 5 steps to organizing the perfect training Free attractions in Wrocław Excellent hotel breakfast Attractions for the family in Wrocław - 7 places to see! Easter - great preparations Where to go for a walk around Wrocław? Weekend in Wrocław? See what to see in two days [GUIDE] We are all women today Discover Lower Silesia with Europeum Stay safe with us! Art (and the hotel! - editorial note) washes away the dust of everyday life from the soul. - Pablo Picasso Successful recipe for Fat Thursday 10 must-see places in Wrocław Helping? It is in our genes! If nothing goes right, call Grandma and Grandpa Merry Christmas! Christmas p(art)y We wish you the best Andrew! It will be season yet! Piotr Micek. To notice the unit in its entirety. Daria Wartalska. Post consumption. We create interiors that will hug you Childhood, where are you? COVID-19: Europeum Code of Practice Become a hero in your home for Easter! Valentine's Day in Europeum
show all
14 of June 2022

The most popular parks in Wrocław

If you're looking for the perfect place to relax in nature, you'll find plenty of green areas in our city. Below we present a subjective list of the most beautiful parks in Wrocław.

Szczytnicki Park is one of the oldest parks in Wrocław, and parts of it have survived to this day. Over 100 hectares of greenery stretch between Różycki, Paderewskiego, Kopernika and Olszewskiego Streets. This park in Wrocław is one of the most diverse areas in terms of nature. About 350 tree species from Europe, Asia and North America grow here - Lawson's cypress, beech, plane tree, Himalayan pine or scarlet oak. Szczytnicki Park in Wrocław is also home to many animal species, including foxes, martens, bats and 70 species of birds. 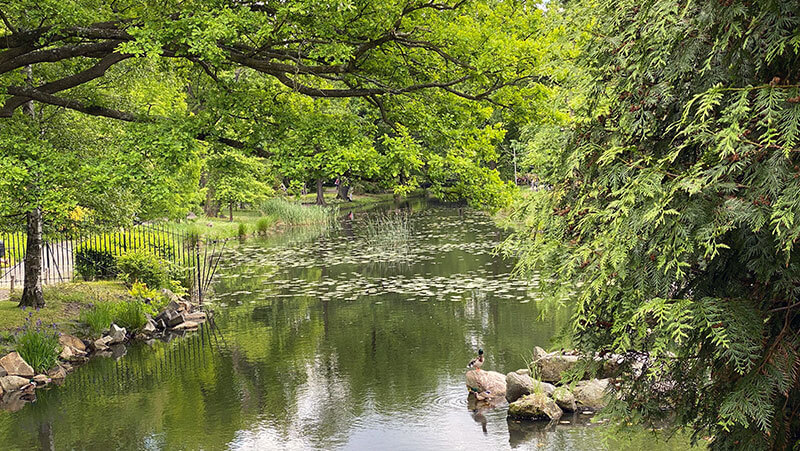 Szczytnicki Park includes the Japanese Park, which is located in its southern part near Pergola. This park in Wrocław is one of the few vestiges of the 1913 World Exhibition that have survived to the present day. It was called the pearl of the exhibition and was prepared and arranged by the greatest Japanese enthusiast of the time, Count Fritz von Hochberg, with the help of Japanese gardener Mankichi Arai. The Japanese Garden in Wrocław is a substitute of the real, Japanese culture, which you can feel while spending time and walking along the alleys leading through the entire complex. 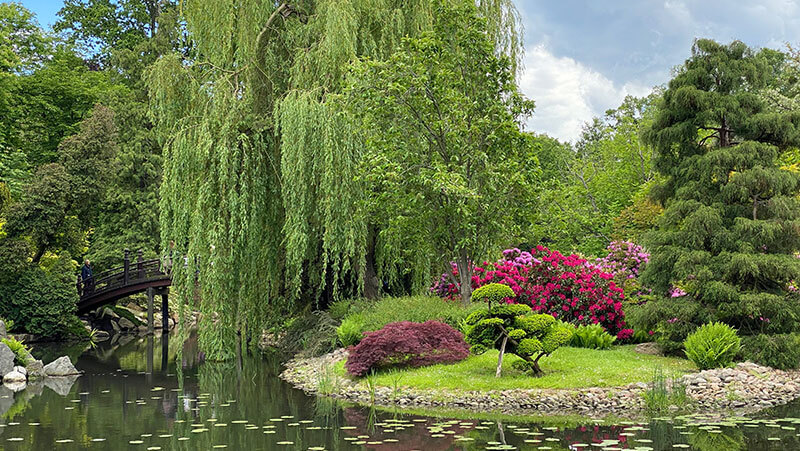 An original place to walk and relax in the centre of Wrocław is the Old Town Promenade. The nearly four-kilometre-long green belt leads from Sikorski Bridge, east of the Market Square, next to the Registry Office, along the city moat, by the Opera and Puppet Theatre, across Partyzantów Hill, next to the Dominican Gallery, through Słowacki Park, to the Museum Bridge and the gondola bay by the National Museum.

The promenade was created on the site of the former city walls, which were demolished by order of the French who occupied Wrocław after the siege of 1807. Although it is not a typical Wrocław park, it is one of the most popular walking places in the city. The route takes you through the city centre past historic edifices, and there are cafes, restaurants and interesting historical buildings along its length.

It may also interest you: Wrocław for the weekend - check out what to see in 2 days 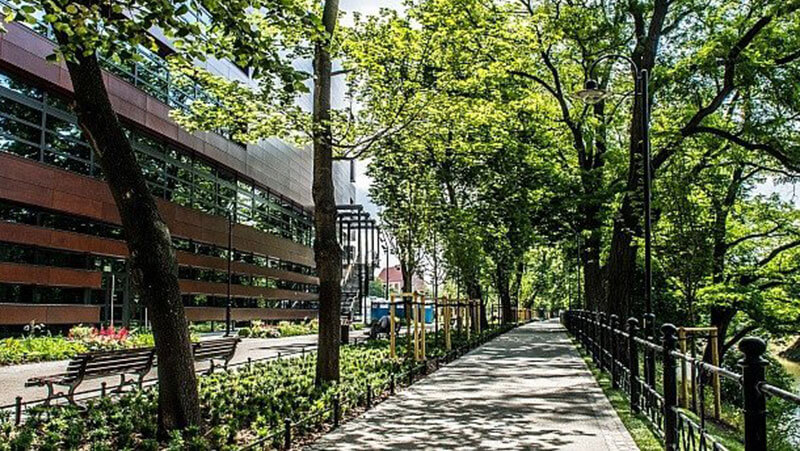 Millennium Park is the second largest park in Wrocław. The complex is located in the western part of the city between Graniczna Street, the Wrocław Motorway Ring Road and the Ślęza River. Created in 2000 on the occasion of the jubilee of the founding of the city, the Millennium Park in Wrocław is still being arranged and developed.

Another popular meeting place for Wrocław citizens is the South Park. Located in an elegant district of the city, the nearly 25-hectare park was donated to the city in 1877 by Julius Schöttlander, a wealthy merchant and philanthropist. Over the course of several years, a picturesque landscape park with a large pond and clearings for relaxation was created here. In the park you can find, among others, plane trees, American tulip trees and cypresses. In 2004, a statue of Fryderyk Chopin was unveiled in the park, which - according to urban legend - was given a face of a famous Wroclaw journalist and music critic, Count Wojciech Dzieduszycki. 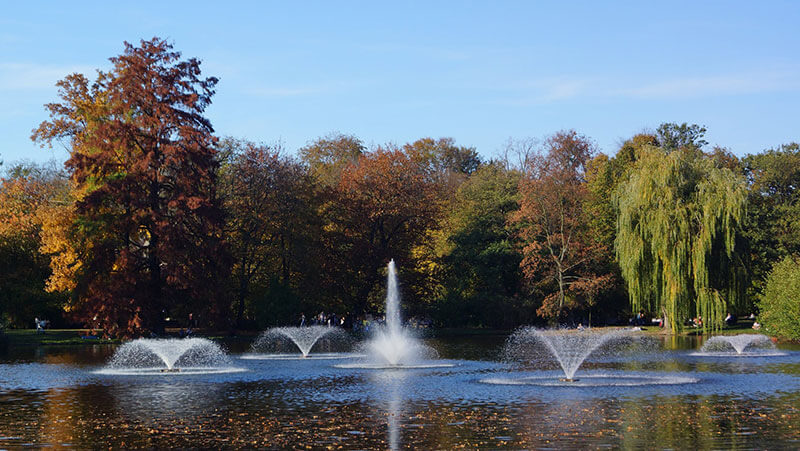 If you dream of a bit of peace and quiet in the middle of the city, then the Grabiszynski Park in Wroclaw will be the perfect place for you. The large area of the park makes it possible to stroll around for hours, the beautiful glades are perfect for relaxing, and the playgrounds will keep the youngest entertained. The park was created on the site of a former cemetery and is full of old trees, and if you venture into the less frequented alleys, you can see the remains of tombstones among the bushes. 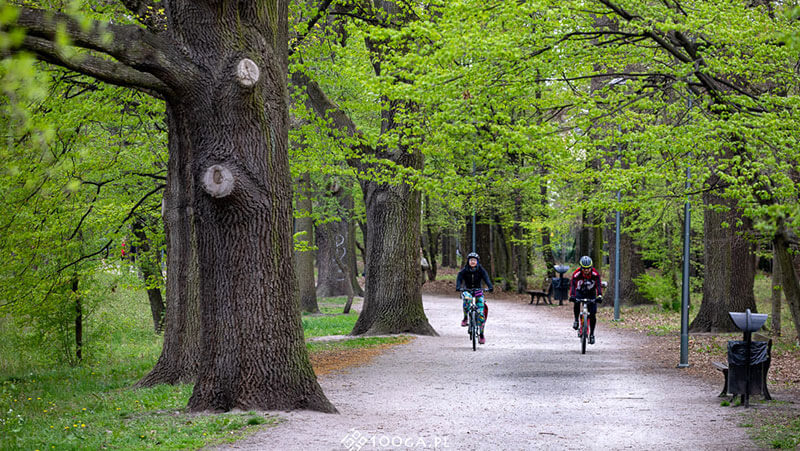 Other parks in Wrocław

A few green alleys can also be found in the city centre - and one of the most charming, willingly visited by families with children, is the Staromiejski Park in Wrocław, located right next to the Puppet Theatre. Here you'll find a sentimental French-style merry-go-round, an unusual playground, lots of lawns and places to relax. The park is home to beautiful plane trees and a huge, monumental gingko tree, while the aviaries are home to Tibetan pigeons.