Other news
Events in Wrocław 2022 - where to go in the second half of the year? Where to go with your children in the mountains? Choose Lower Silesia! What to take on holiday with your child? List of essentials Attractions near Wroclaw - 5 places for a trip into nature Stay Wild Festival Contest! Cycling routes in Wrocław - the best paths for fans of two wheels Parks in Wrocław - where to go for a walk? What to do in Wrocław during the May weekend? Where to go for a long may weekend? April Fool's Day Competition! What to see in Wroclaw in winter? 10 recommended attractions! Valentine's Day competition "In love at the Europeum" What to do during winter holidays in Wrocław? Pillow menu How to organize a company Christmas Party? Christmas Market in Wroclaw 2021 - dates, attractions and driving directions September is not the end of summer holidays! Wroclaw Beach Bars, in other words chill-out in the city Legends of Wrocław - Europeum tells. The history of The Dumpling Gate #EuropeumBikeChallange, in other words Wroclaw by bike The 10 best restaurants in Wrocław TOP 7 Museums you MUST SEE in Wroclaw 5 steps to organizing the perfect training Free attractions in Wrocław Excellent hotel breakfast Attractions for the family in Wrocław - 7 places to see! Easter - great preparations Where to go for a walk around Wrocław? Weekend in Wrocław? See what to see in two days [GUIDE] We are all women today Discover Lower Silesia with Europeum Stay safe with us! Art (and the hotel! - editorial note) washes away the dust of everyday life from the soul. - Pablo Picasso Successful recipe for Fat Thursday 10 must-see places in Wrocław Helping? It is in our genes! If nothing goes right, call Grandma and Grandpa Merry Christmas! Christmas p(art)y We wish you the best Andrew! It will be season yet! Piotr Micek. To notice the unit in its entirety. Daria Wartalska. Post consumption. We create interiors that will hug you Childhood, where are you? COVID-19: Europeum Code of Practice Become a hero in your home for Easter! Valentine's Day in Europeum
show all
05 of August 2021 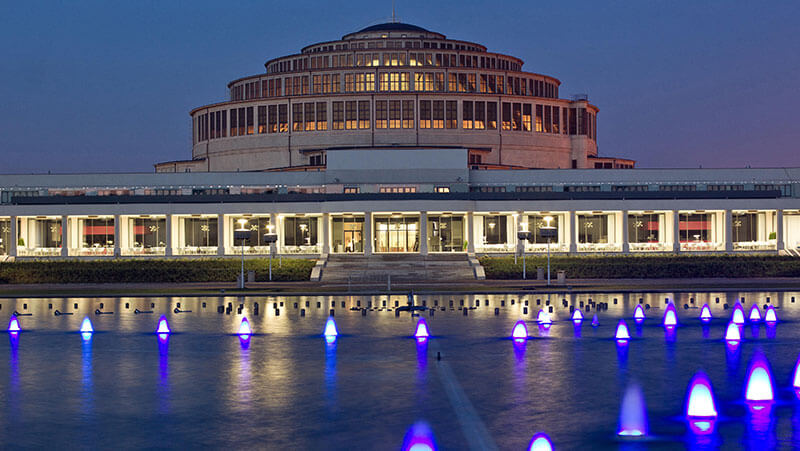 Where did the idea come from?

The present Centennial Hall was to be built to celebrate the hundredth anniversary of the proclamation of Frederick William III and the Triumph over Leipzig. The plan at that time was to organize an exhibition on a global scale in the capital of Lower Silesia. Unfortunately, at that moment there was no facility that could accommodate thousands of exhibitors and visitors. Therefore, it was necessary to design a space that would combine both fair and exhibition and recreational functions. Such a project was created by Mark Berg. 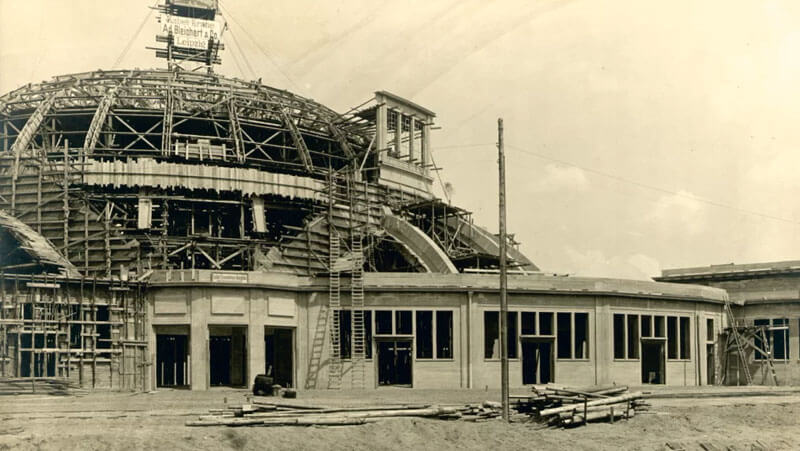 The first works on the Centennial Hall began in May 1911, and already in December 1912 the company Dyckerhoff & Widmann handed over to the city the building in a shell. The Four Domes Pavilion, a pergola and other recreational facilities were also built in the area surrounding the Hall. On the other hand, the official opening of the Centennial Hall took place on May 20, 1913, when Mayor Paul Matting gave a patriotic speech. The Centennial Hall was then called "a monument to the liberation of the homeland and a warning to all generations." Later, this monumental building also became one of Hitler's favourite places to speak. 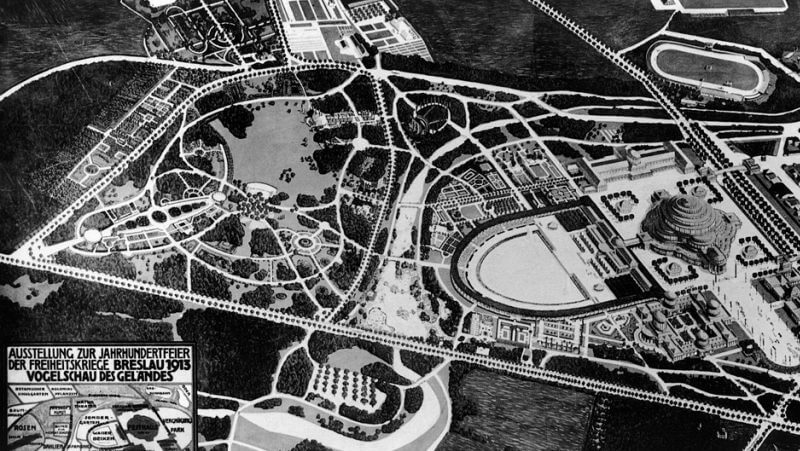 The Centennial Hall survived World War II without serious damage. On the other hand, the organs were destroyed. It was a great loss due to the fact that they were specially designed to order by Sauer. At that time, they were the largest organs in the world, which were made with great precision.

After the end of World War II, the then authorities decided to change the name of the building to "Hala Ludowa". The original nomenclature was only restored after 2000.

Another breakthrough took place in 1948. On the way to the entrance to the Hall, a steel structure, over 90 meters high, was erected - Iglica. It was supposed to symbolize the reviving life in the Recovered Territories.

Nine years after its creation, the facility partially turned into the largest cinema in Poland. It was called "Giant" for a reason. This cinema was very popular and operated intermittently until the nineties.

In the nineties, Centennial Hall (then Hala Ludowa) was still a place of cultural, political and sports events. It often changed into a basketball arena, where basketball players from Slask Team were very successful, and in 1997, during the Eucharistic Congress, Pope John Paul II spoke here. The same year he was recognized as an Honorary Citizen of Wroclaw. 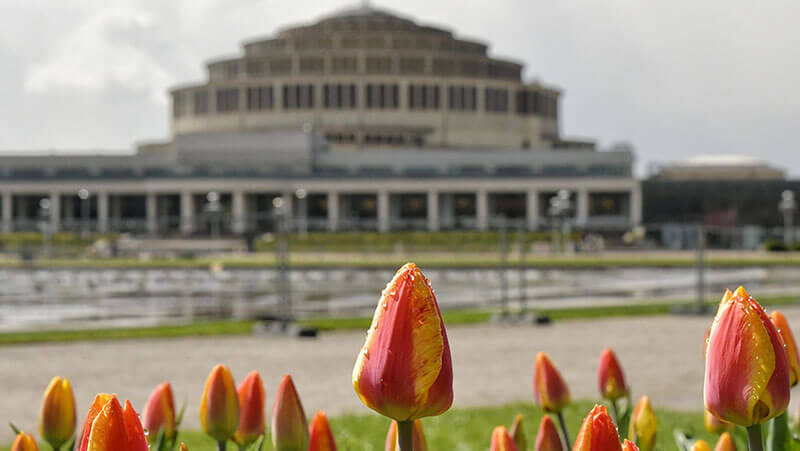 In 2009-2011, the Hall was renovated and the Regional Business Tourism Center designed by Max Berg was built. Renovation of the external facade of the building also included the replacement of all 600 windows. This point turned out to be the most problematic, because Max Berg used iron mahogany specially imported from Australia in his design. Today, this species of tree is not present, therefore, with the consent of the conservator of monuments, teak was used, which significantly increased the costs of renovation. 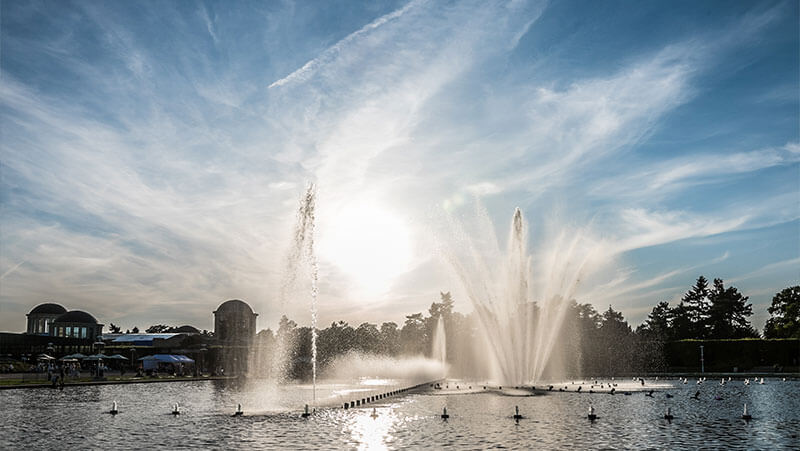 In 2006, the Centennial Hall was inscribed on the UNESCO World Heritage List, and a year later a cast-iron plaque confirming the entry was placed in front of the entrance.

Although the building reflects the culture of a given era, it is very popular thanks to its originality and multi-functionality. It can be visited every week, from Thursday to Sunday from 10:00 a.m. to 6:00 p.m. There are also concerts, conventions, fairs and other cultural events.

You cannot forget about the multimedia fountain next to the Centennial Hall. Its shows, which we can watch every day, delight both children and adults.